Amberly only started with the Imaginators this fall, but she has already contributed tons of creative energy to the club! Some of her favorite authors are Alex Hirsch, Jhonen Vasquez, and JK Rowling, and she likes writing fantasy and sci-fi. She’s also a great artist and likes to create short comics and graphic novels. Here are some Amberly’s short pieces created from writing exercises during club meetings, some of which have accompanying doodles! (Keep in mind, sometimes we run out of time, and a few are only the beginnings of stories.)

A long time ago, in an isolated magical forest, there was a wizard gardener. The wizard grew many magical food trees. There were candy trees and pizza trees and almost any kind of tree one could imagine, but he wizard’s favorite was, by far, the mighty burrito tree.

The burrito tree stood taller than any of the other magic trees, and it produced its enchanted burritos all year, though they were a bit cold in the winter. The wizard loved the burrito tree because it was the first magic tree he’d ever grown, and it grew wonderful burritos.

However, as time went on, the burrito tree grew less and less. Its burrito production slowed until one day there were no more burritos.

Only the lost could find the bridge. It would take them where they needed to go, forward or backward in time to make their lives right again. The bridge was a savior, a comfort, but no one could stay.

People never remembered the bridge once they’d crossed. It was barely a place of its own, always dedicated to wherever a person was going. If bridges could feel, this would be the loneliest.

Quinn opened one of the dusty old boxes they’d found while looking through the attic. They weren’t sure what they had been looking for, but it was soon forgotten in favor of the huge stack of old photographs inside the box. One of them particularly stood out — a picture of a huge scaly thing labeled “Green Dragon Nine.”

At first Quinn thought it must be fake, but the photo was much older than any photo-editing software, and the dragon didn’t look like a puppet or a costume.

The Hurricane of Rom-Com Day

On Rom-Com day, citizens are required to stay indoors and watch romantic comedy movies for the day. So perhaps it was a good day for a hurricane to occur, as everyone was already safely indoors. However, it is rather difficult to watch a movie when the power goes out and water is leaking through your windows. Undeterred, the citizens stare at their blank television screens. After all, everyone knows what happened to the last person who disobeyed Rom-Com day.

It was late at night. Cinna gulped as she crept down the path, darting her flashlight around at any noise she heard. There was a distant, indistinct shout. Someone else was around.

Throwing caution to the wind, Cinna broke into a run. She didn’t know where she was trying to go, but she didn’t expect where she ended up.

She stumbled upon a clearing filled with masked people scurrying around a large balloon. What were they doing? 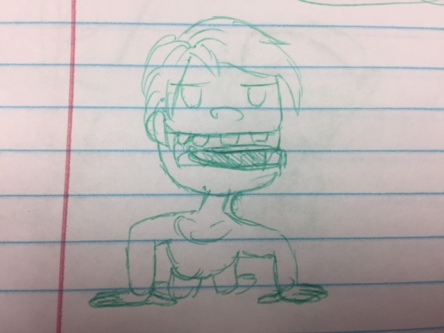 Metal screeched as Tom attempted to eat the horseshoe. It occurred to him that perhaps his friend had meant something else by “horseshoe,” but it was too late to stop now; he’d look like a fool. He glanced at the sky and coughed as an ominous cloud approached. The air quality there was not good.

The octopus wheeled its wheelchair forward, clutching a doughnut in one tentacle and the mystic key of worlds in another. It wasn’t going to miss the hot air balloon. Not this time.

Nathan was a nerd. He was rather proud of this, even though it tended to exasperate those around him. He liked video games, learning, and being indoors at his apartment in New York. What Nathan did not like was the cold. So finding himself alone and lost in the North Pole was not his idea of a good time. And yet, here he was.

Copyright © 2017 by Amberly. All rights reserved.